You Could Live Here…The Louis I. Kahn Esherick House 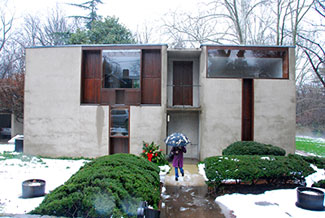 Entering the house on a rainy day

We often put great architects on a pedestal and view visits to their buildings as pilgrimages… at least I do. While visiting my family in Philadelphia over the holidays I was able to view the work of architect Louis I. Kahn in a much more intimate setting. I had visited Kahn’s masterpiece — the Kimball Art Museum — in Dallas last spring. This time I was able to visit one of the few residential buildings he designed in Chestnut Hill, PA with a realtor at Eichler & Moffly.

The house, known as the Esherick house was commissioned in 1959 by Margaret Esherick, niece of Philadelphia sculptor Wharton Esherick. Because of the connection, the house includes a rare intact kitchen created by Wharton Esherick. While both designers celebrate truth in materials, the organic and sculptural

nature of the cabinetry is in definite contrast to the more linear geometry found in the rest of the house.

We visited the house on a cloudy day, but I was still astonished by the wonderful open space and the natural light which filtered through the tall windows in the main living area and throughout the house. I was mesmerized by the richness of apitong wood used throughout and Kahn’s ability to provide a living space that was both intimate and spacious. This is only a modest one bedroom house but feels like much more.

some of my favorite Kahn details

From the sale catalog: “Kahn’s principles of geometry, light and materiality are clearly expressedin the Esherick house, imbuing the intimate residence with a sense of monumentality. The material nature of the house—what it is and how it is made—is apparent at first glance: a private, contemplative building simply constructed of warm beige concrete and natural Apitong wood. Clarity and tranquility characterize the whole of Kahn’s work, and the Esherick house (1959-1961) is no exception. 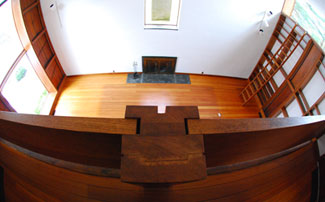 View of the Living Room from above

Situated at a perfect angle on a property measuring more than half an acre, the house has a striking presence. The approach features a planar composition with a textured mortar finish bisected by a strong vertical chimney, while keyhole windows framed with Apitong and placed at irregular intervals punctuate the front facade. The floor plan reveals Kahn’s refined design of two symmetrical side-by-side rectangles that allow for both openness and structural clarity. Kahn’s use of pure geometry in the facades and interior spaces speaks to archetypal references that Kahn drew on throughout his body of work. Here, like in all his buildings, Kahn united this architectural history with the modern present in a truly unique structure.”

Additional photos and floorplans can be found on the greatbuildings.com site. 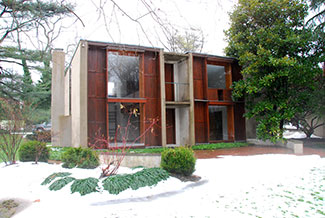 exterior from the backyard

It was a treat to be able to visit the work of an architect of Kahn’s level on such an intimate scale and to see a building that is so well preserved. Rarely is the public able to access a private commission such as this… let alone purchase it! After spending time in this gem, I wish I had an extra $2.4 Million. I would move in tomorrow!

2 responses to “You Could Live Here…The Louis I. Kahn Esherick House”