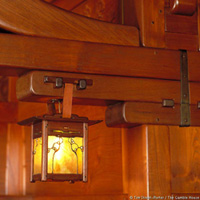 Interior of The Gamble House, Greene and Greene

Last night I watched Christopher Nolan’s Inception for a second time. I can’t say that this time it all made sense, but I was able to let the plot go and focus on the amazing visuals and architectural references including some of my favorite designers — Charles Rennie Mackintosh, Frank Lloyd Wright and Charles and Henry Greene. (Upstaged by Design has explored this in The Architects of Simplicity). My favorite dream space has to be Leonardo DiCaprio’s imagined Arts and Crafts style home within a contemporary skyscraper. How cool is that?

While watching the film I was impressed with the quality of the interior space used for Cobb’s home… it was either an amazing recreation or more likely an existing house. Turns out the movie was filmed in a “real” house in Southern California by none other than Greene and Greene. The house used is the Freeman A. Ford House at 215 S. Grand Avenue in Pasadena, designed in 1907. The house is privately owned and few photos exist, but you can see that the door detail in the film is the same in early exterior photos. You can view additional images of the Freeman Ford House here. (from Greene & Greene by Randell Makinson)

Charles and Henry Greene received international acclaim for bringing the Arts and Crafts movement to America and are often identified with California bungalow style architecture. The level of craftsmanship and artistry in their work is rarely seen today… one reason I was not surprised that the “set” used in the film was actually the real thing. Their most famous masterpiece is the Gamble Mansion in Pasadena, just a short distance from the Ford House. It was done in the same period (1908) and shares similar design elements. If you ever have to opportunity to be in Pasadena, two times a month the house is open for a “Behind the Velvet Ropes” 2 1/2 hour tour which is truly amazing. T and I travelled to Pasadena to do this several years ago and it was well worth the trip. This house is a gem and the extended tour allows to you feel what it must have been like to live there. The exquisite detail, warmth of the wood, and soft light surrounding you is truly transporting.

The architects of Inception are not the first to replicate the genius of the Greene brothers. A miniature version of the Gamble House was created in 1987-89 by artists Pat and Noel Thomas who specialize in creating 1 inch to 1 foot scale architectural models that show the patina of age. “Their work is more that of painters than of builders, in that they work to create a ‘feeling,’ an illusion of reality that evokes memories from those viewing their work.”

Whether dream or reality, the work of Greene and Greene takes us to a place of timeless beauty dappled in warm California sunlight… something those of us on the East Coast sorely need right about now.